“Support for frontline health workers is critical in controlling the epidemic and strengthening the health care system going forward.”

While local and international efforts have significantly slowed the spread of Ebola in West Africa, AmeriCares continues to support treatment of Ebola patients and protect health workers on the front lines of the epidemic. In Liberia, AmeriCares is now focused on rebuilding and strengthening the health system to improve access to health care and help prevent future epidemics.

Since the world’s largest Ebola outbreak began in early 2014, the virus has killed more than 11,100 people and infected more than 26,900. The disease has had a huge impact on health workers, infecting 869 and killing 507, including many doctors and nurses.  The loss of so many health workers has been devastating to the region’s health care systems, which were already under-resourced and under-staffed, leaving people with malaria, typhoid, complicated childbirth and other illnesses without access to even basic care. 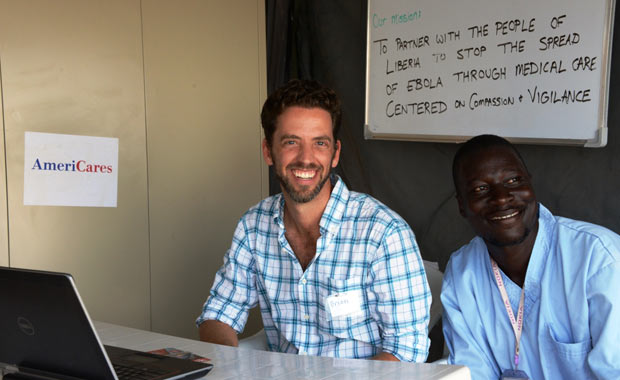 Brian Hoyer and Kla Williams – two of our team at Buchanan

AmeriCares first responded to the outbreak in April of 2014, with a focus on protecting health workers, expanding Ebola treatment capacity and restoring and improving health services.

Within a year, AmeriCares had provided millions of critical protective supplies to more than 100 health facilities in the three most-affected countries, recruited medical staff for and supplied Ebola treatment units in Liberia, and begun a long-term response to the on-going health crisis in West Africa, including infection prevention and control training for health workers.

Even as the epidemic ebbs, health workers in all three countries need critical support, including medicine, protective equipment and training. 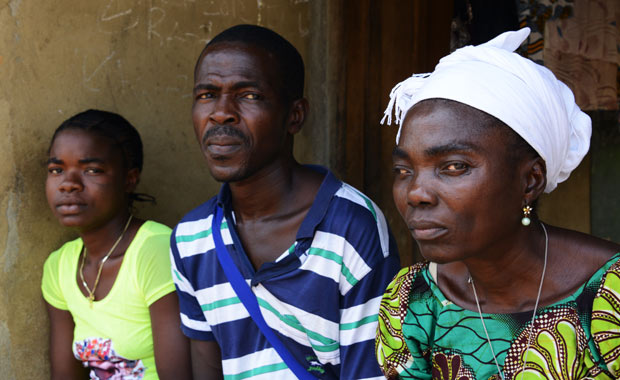 Three Ebola survivors from one community.

“As our work to completely contain Ebola continues in West Africa, there is an ongoing need for safety equipment along with prevention and treatment supplies,” said AmeriCares Vice President of Emergency Response Garrett Ingoglia, “Support for frontline health workers is critical in controlling the epidemic and strengthening the health care system going forward.”

Programs and Plans in Three Countries

In Liberia, AmeriCares established an office and warehouse in the capital city of Monrovia to efficiently distribute supplies to health facilities. AmeriCares Liberia team also manages our longer term commitment to build the capacity of the health care system to meet future health crises.

At the height of the outbreak in September of 2014, AmeriCares recruited all of the physicians and nurses needed to staff the Ebola treatment unit (ETU) built by the U.S. Department of Defense in Buchanan, Grand Bassa County, as part of a partnership with the International Organization for Migration (IOM) in coordination with the Ministry of Health and Social Welfare and funded by USAID. AmeriCares managed the facility and its staff of more than 180 health workers; the team revised safety protocols and maintained a constant state of readiness to isolate and treat Ebola patients, from construction at the height of the health emergency through the treatment center’s decommission after the outbreak had greatly diminished. In addition, AmeriCares provided all medical supplies needed to treat Ebola patients and protect staff at two other Ebola treatment centers managed by IOM in Liberia.

As part of a longer term program to strengthen an already under-resourced health system weakened by years of civil war and devastated by Ebola, AmeriCares has begun an 18-month project to increase access and improve health services for mothers and newborns in Grand Bassa County.  The work includes health facility upgrades, medical equipment and staff training at three health facilities – one hospital and two clinics.

Read the story of a tiny survivor and her treatment

Since the first outbreak in 1976, the Ebola virus has one of the highest fatality rates—up to 90%. The current outbreak has a 55% death rate. There is currently no vaccine and no proven cure.

Ebola is transmitted through direct contact with blood, body fluids and tissues of infected persons. Bodies can remain contagious for up to 60 days.

In Sierra Leone, we continue to supply personal protective equipment (PPE) to caregivers in interim care centers for children who have been exposed to Ebola and require temporary care outside the home for 21 days – some of whom have parents who are ill or have died from the disease. AmeriCares also provides reunification kits for these children when they leave the care centers that include food, clothing and personal care supplies to replace lost items and help ease a child’s transition back into the community.

AmeriCares has also committed to providing 12 months of infection prevention and control training in Bonthe District for all health workers at Mattru Hospital and Bonthe Government Hospital. This health worker and patient-safety intervention will contribute to long-term health system strengthening that will prepare Sierra Leone for future infectious disease outbreaks.

In Guinea, where the Ebola outbreak began in early 2014, AmeriCares continues to provide our partners with medical equipment and supplies. Our largest shipment to date – 40,000 lbs. of PPE – will be distributed to more than 180 health facilities.  The shipment also contains more than 15,000 liters of bleach which will support ChildFund International, our partner in Guinea, working with health clinics, health posts and community health workers to maintain infection prevention and control standards and to rebuild community trust in the health care system.

With the support of our corporate partners and donors, 47 shipments of medical aid have been delivered to more than 100 partners in West Africa to treat Ebola patients, provide protective gear for health workers and prevent further infections. To date, we have shipped over 7 million units of medicine and medical supplies, including 3.3 million units of protective equipment and 227,543 course treatments of medicine to partners in West Africa.

Through our partnership with Cardinal Health, for example, we have sent multiple shipments of protective supplies, including surgical gloves, masks and isolation gowns, to the affected area with more shipments planned. In addition, AmeriCares has sent multiple shipments of Clorox®Regular-Bleach to our partners in Sierra Leone, Liberia and Guinea. Chlorine solutions made with bleach are essential for hand washing and preventing and controlling infection at local health centers. 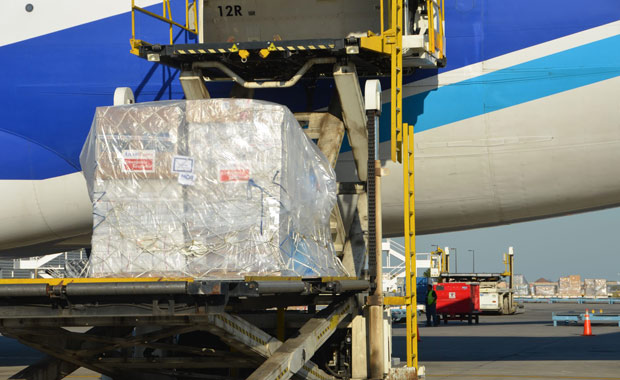 Early Response to the Crisis

AmeriCares first response to the outbreak in April 2014 included the purchase and distribution of protective gear and medical supplies for health workers in West Africa as well as support for public messaging campaigns to spread awareness about the disease for which there is no proven cure. Overall, confirmed cases and fatalities have been reported in Guinea, Sierra Leone, Liberia, Nigeria and Mali. Cases have also been reported in the U.S., Spain, Senegal and the United Kingdom.

Learn More about Our Ebola Response

“People think Ebola is over but it is not over. If Ebola is in Sierra Leone or Guinea, then it is in Liberia. Everybody working here knows Ebola is not over.”

Sophia B. Johnny, the IPC Wash Supervisor at Buchanan ETU