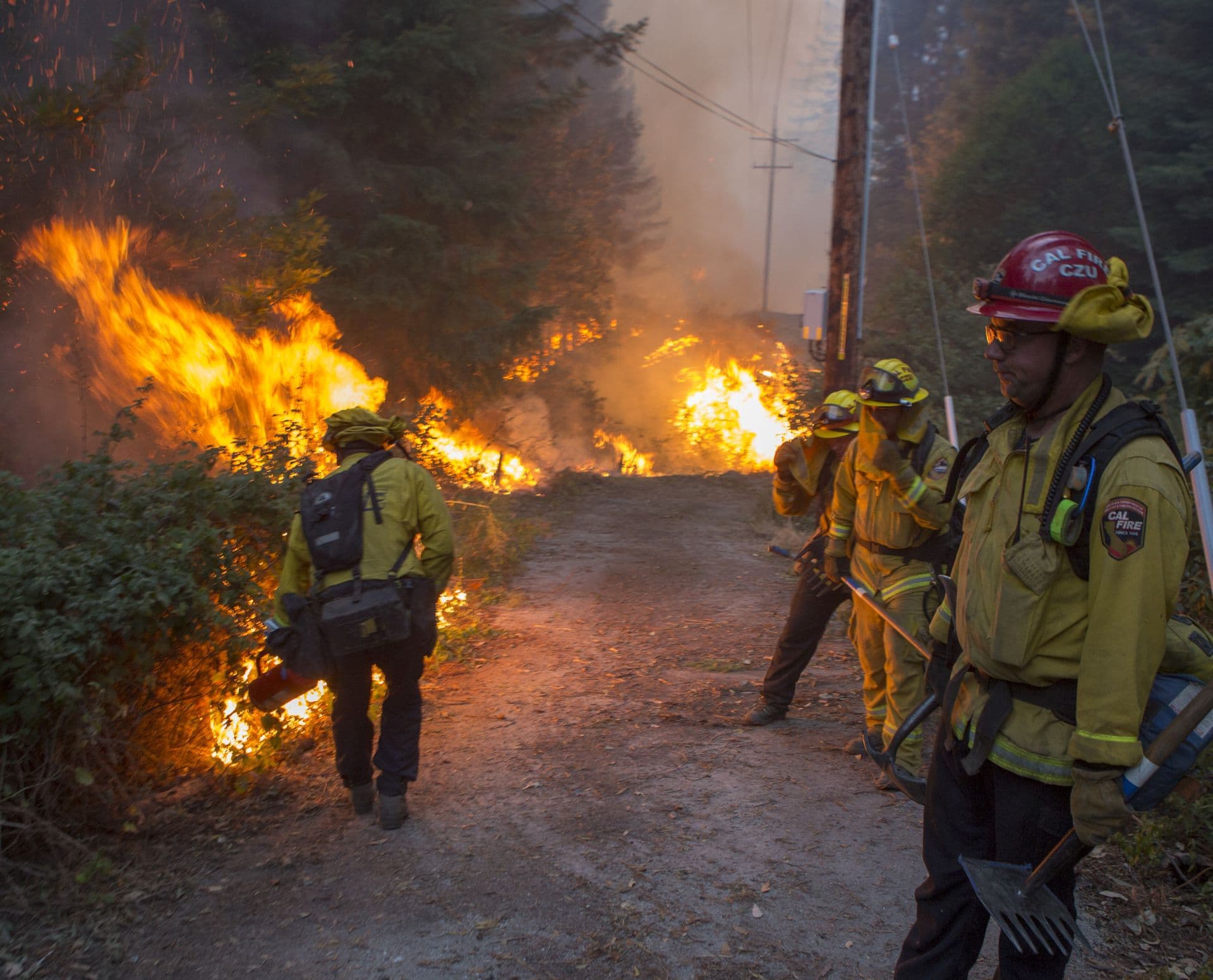 A Country on Fire

In 2020, the US experienced a record number of wildfires; more than 50,000 wildfires burned 8.8 million acres, consuming more than 2 million acres beyond the 10-year average and nearly double the wildfires in 2019. As fire conditions intensified in Northern California, U.S. Drought Monitor, a weekly update compiled by several federal agencies, said 75% of California was experiencing drought-like conditions. Wildfires burned across a dozen states, where more than 100 large fires burned more than 5 million acres. Some 9,600 fires in the state scorched more than four million acres of land in California, displaced tens of thousands of people and caused the deaths of dozens of individuals while destroying more than 10,400 structures. New wildfires continued to break out beyond the official end of the fire season. The Airport Fire started on December 1 in Riverside county and burned 1,087 acres, before being contained. The Bond Fire started on December 2 in Orange county and burned 7,375 acres. Significant fires in California that had been previously contained: the CZU /Lightning Complex (San Mateo, Santa Cruz counties); the LNU Lightning Complex (Lake, Sonoma, Napa, Solano counties); and the SCU Lightning Complex (Alameda, Contra Costa, Santa Clara counties). The August Complex Fire, the largest in California’s history, consumed more than 817,000 acres. The Glass Fire destroyed wineries and many homes in Napa Valley. Another fire, the Bobcat fire raged in Los Angles County.

Hundreds of homes, businesses and other buildings burned to the ground, and hundreds of thousands of people were forced to evacuate as hot, dry and windy weather across the West left parts of California, Oregon and Washington under siege from this unprecedented 2020 fire season. And then massive fires emerged in Colorado. The Cameron Peak Fire was the largest in the state’s history. Entire communities were obliterated in some states while smoke and ash made the air dangerous to breathe. The fires have been described as “apocalyptic” as the threats from climate change become all too real for many residents of the three states. At the same time, California was also working to slow a resurgence of the Global COVID Pandemic.

Americares Emergency Team responded and our team is still working in the state on training and disaster preparedness.

CalFire firefighters from Santa Cruz work to contain fire near a home on Bonny Doon Road while fighting the CZU August Lightning Complex fire in Bonny Doon northwest of Santa Cruz. The fire was sparked by lightning and has burned throughout broad regions of rural San Mateo and Santa Cruz counties. (Photo by David Royal) 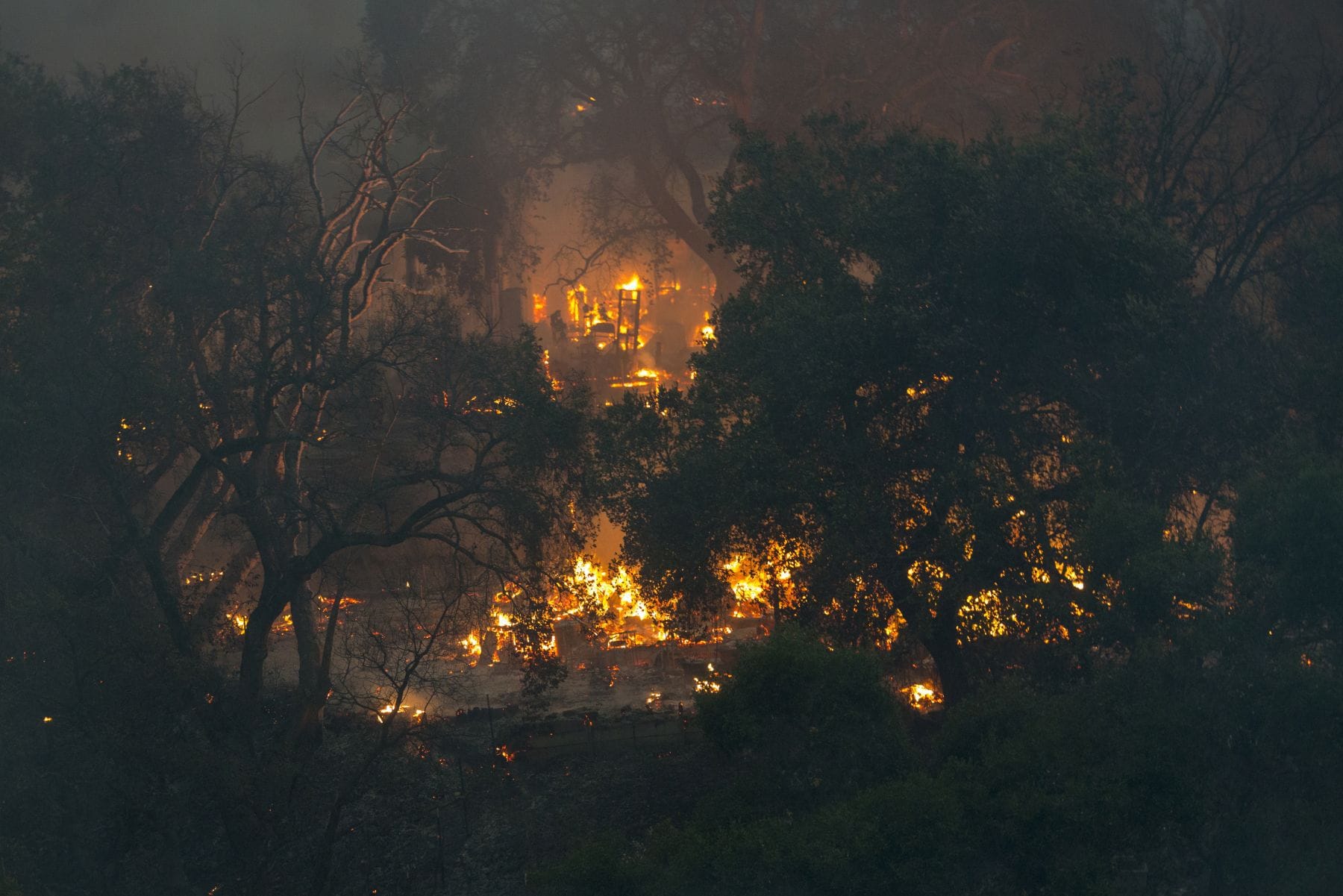 1. Oregon faced great loss of human life and property due to fast-moving wildfires, the largest in state history. Half a million people, or 10% of the state’s population, were at one time under evacuation.

2. California saw six of the largest 20 wildfires in state history in 2020, burning more than 4.1 million acres. Multiple fires merged together to create complex large-scale fires, such as the August fire which became the largest in state history. Thousands of structures were threatened and many homes were destroyed. Two new fires in Napa and Sonoma counties presented major threats in the wine country region.

3. Even as conditions improved. Washington saw towns overrun by blazes and hundreds of homes at risk.

4. Fires generated smoke and ash throughout the West, compromising air quality for millions. Three US cities (Seattle, Portland and San Francisco) at one point were reported to have the worst air quality in the world.

A structure burns during the Carmel Fire in east Carmel Valley. (Photo by David Royal)

Emergency Programs, led by our California-based team members, actively engaged with county, region, and state emergency response coordination bodies. In addition, the Emergency Team offered support to health centers and partners. Americares sent truckloads of bottled water to Food Banks in Santa Rosa and Solano County. Along with a local partner, we provided cash assistance to families who were displaced or otherwise severely impacted by the fires. Since people who had to evacuate had been sheltered in hotel rooms rather than large communal shelters, cash assistance emerged as the most effective and efficient means of immediate assistance for basic needs.

Conversations with frontline health workers, social service providers, and non-profit response organizations indicated an immense need. Clinics reported double the number of patients as they cared for people who had evacuated their own communities. Americares supported these clinics with the additional PPE they needed, given the uptick in consultations. In addition, because most COVID-19 testing is conducted outdoors, many clinics had to pause testing given the dangerous air quality. As clinics resumed COVID-19 testing, supply shipments followed the truckloads of bottled water that had been previously delivered to support fire response in California (over one million bottles). Additionally, two truckloads of bottled water were sent to Oregon. Overall, we committed $2.5 million in aid. In response to this unprecedented disaster, Americares sent 18 total shipments to 16 health centers and nonprofit partners in California, Idaho, Oregon and Washington along with grant support for 7 partners.

A shipment of medical consumables, hygiene supplies, and PPE went to La Clinica del Valle Family Health Care Center. La Clinica has a facility in the city of Phoenix, Oregon that narrowly survived the Almeda Drive Fire that devastated much of Phoenix. The center serves migrant agricultural workers among other vulnerable groups, many of whose homes were destroyed in that fire. An Americares shipment of medicines, medical supplies, hygiene supplies, and PPE supports Pacific University’s Interprofessional Diabetes Clinic, in Forest Grove, OR. PUIDC is a nonprofit clinic established in 2009 that primarily serves a low-income, uninsured, Latinex community living with diabetes and other associated chronic diseases, many of whom were seriously affected by the recent wildfires.

Read more about our response.

Following Americares response to the devastating 2018 and 2019 California wildfires, the organization has undertaken a robust disaster preparedness and mental health initiative designed to build the capacity of safety-net health centers in fire-prone regions of California.