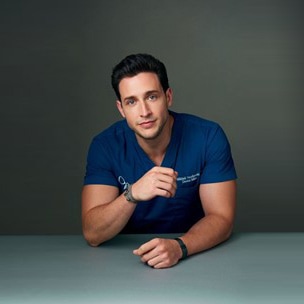 With over 15 million social media followers, Dr. Mikhail Varshavski, commonly known as “Doctor Mike,” is a multifaceted board-certified family medicine physician, media personality, educator, writer, and philanthropist. Emigrating from Russia to New York at the age of 6, Doctor Mike grew up to pursue his medical degree at the New York Institute of Technology with a B.S. in Life Sciences and a Doctorate in Osteopathic Medicine with honors by the age of 24.

During his residency, Doctor Mike decided to document his journey and share his medical learnings with the internet. Over the next few years, he garnered 651+ million views, making his platform one of the largest in health education. Leveraging his media presence and impact in the medical community, he covers the importance of health literacy while simultaneously battling misinformation in a practical, yet entertaining approach.

Doctor Mike has made appearances and consulted on many mainstream news channels such as CNN, ABC and Fox News, alongside interviewing some of the United States’ most notable health professionals, Dr. Anthony Fauci and the head of Google Health, Dr. David Feinberg. In June, Mike was named an ambassador for the United Nations’ “Verified” initiative. Additionally, Doctor Mike donated $50,000 in masks to his local hospital and raised over $65,000 for the CDC Foundation.

Doctor Mike continues to regularly contribute to esteemed publications including New York Daily News, Women’s Health, Men’s Health, Reader’s Digest, American Academy of Family Physicians Blog, and MedPageToday. He has further established himself in the field of digital healthcare & medicine, presenting seminars and lectures for the TEDx Conference, Mayo Clinic, and many more.

In 2015, Doctor Mike expanded his outreach when he launched his charity, “The Limitless Tomorrow Foundation,” an organization that seeks to financially support and give back to students in need.  Additionally, Doctor Mike has strong ties with several other philanthropic organizations including Stand Up 2 Cancer, AmeriCares, and the Susan G. Komen Foundation.

Today, Doctor Mike is one of the most influential medical educators of the digital era.