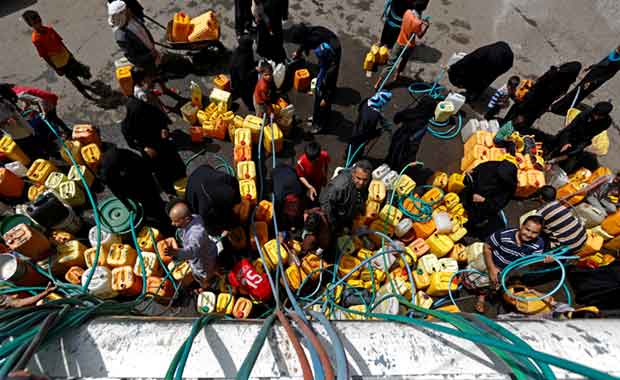 Stamford, Conn. – Aug. 2, 2017 – Americares has made a commitment to provide treatment for tens of thousands of children and adults suffering from malnutrition and the world’s worst cholera outbreak.

The health-focused relief and development organization plans to increase its aid deliveries for the hunger and health crisis, with a goal of providing treatment supplies to care for 60,000 patients in the Horn of Africa and Yemen by the end of the year.

Americares shipments will contain intravenous fluids and oral rehydration solutions to treat dehydration and diarrheal diseases, including deadly cholera, in patients weakened by malnutrition. Yemen, which is in the midst of the world’s worst cholera epidemic, and Somalia and Kenya, where a prolonged drought has pushed the region to the brink of famine, will receive the bulk of the aid.

“This crisis is complex, but cholera treatment is not. Patients who receive rapid hydration have an excellent chance of survival,” said Americares Senior Vice President of Global Programs Dr. E. Anne Peterson. “The quicker we respond, the more lives we can save.”

More than 430,000 suspected cholera cases and 1,903 deaths have been reported in Yemen since April, according to the World Health Organization. About 5,000 more people become infected each day, and health workers are struggling to contain the deadly disease. The International Committee of the Red Cross projects one out of every 45 people in Yemen could become infected by the end of the year—about 600,000 people. Cholera spreads quickly in areas with poor sanitation and limited access to clean water like Yemen, where two years of war have destroyed health centers, sanitation facilities and water treatment plants.

Across the region, political conflict and a severe drought have spiraled into a devastating hunger and health crisis that’s endangering the lives of 20 million people in four countries. Americares launched a large-scale response in April with the delivery of 31,000 liters of intravenous fluids to Somalia, where malnourished children and adults are living in crowded camps making them vulnerable to infectious diseases like cholera. Left untreated, cholera can kill within hours.

More than 58,000 suspected cholera cases and 812 deaths have been reported in Somalia since the beginning of the year. More than half of new infections are in children under 5.

“The scale of the crisis in the Horn of Africa and Yemen is unprecedented. But cholera is both treatable and preventable,” Dr. Peterson said. “We won’t stand by while children’s lives are at stake.”

Americares has professional relief workers ready to respond to disasters at a moment’s notice and stocks emergency medicine and supplies in its warehouses in the U.S., Europe and India that can be delivered quickly in times of crisis. The organization responds to an average of 30 natural disasters and humanitarian crises worldwide each year, establishes long-term recovery projects and brings disaster preparedness programs to vulnerable communities.

Americares has a long history of responding to cholera outbreaks, including the 2015 outbreak in western Tanzania, the 2012 outbreak in Sierra Leone, the 2011 outbreak in Somalia, and outbreaks in Haiti following the 2010 earthquake and Hurricane Matthew last year.

Support Americares response to the Hunger and Health crisis