Saving the Tiniest Babies in Kosovo

Sebahate was seven months along in her first pregnancy when dangerously high blood pressure led to an emergency C-section to save her unborn child.The baby girl she and her husband named Laura* weighed less than 2 pounds at birth and struggled to breathe, her tiny lungs not yet fully developed.

The preemie spent her first days of life in the neonatal intensive care unit at the University Clinical Center Kosovo’s Neonatal Intensive Care Unit, where she survived thanks to respiratory medication donated by AmeriCares and AbbVie, and the assistance of a continuous positive airway pressure machine. AmeriCares supports the NICU through a partnership with Action for Mothers and Children, a local NGO focused on improving the survival rates of mothers and babies in Kosovo, one of the poorest countries in Europe.

Laura is one of more than 1,000 premature low-weight babies to survive since 2006 when AmeriCares and Abbott began delivering surfactant therapy to prevent respiratory distress in pre-term infants. AbbVie spun off from Abbott in 2013 and has sponsored the program ever since. 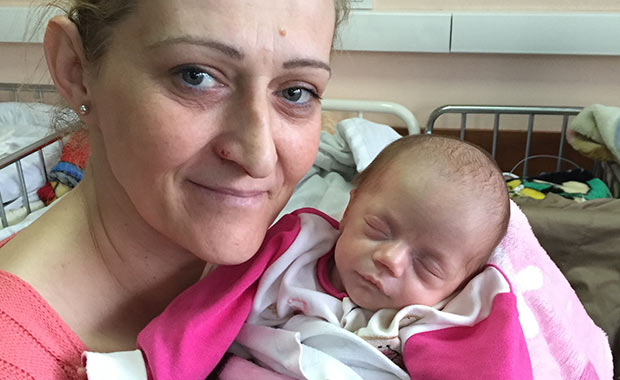 A mother with her newborn daughter treated with surfactant from AmeriCares and AbbVie at the University Clinical Center Kosovo’s Neonatal Intensive Care Unit.

Over the past 10 years, the program has supplied more than 2,100 vials of the surfactant replacement drug to Kosovo valued at more than $1.4 million. Dr. Mynevere Hoxha, director of the Neonatal Intensive Care Unit at UCCK, said the donations save the lives of approximately 200 infants every year.

“Surfactant prevents the air sacs in the lungs from collapsing when the baby exhales, giving our smallest and most fragile patients a fighting chance to survive,” said Dr. Hoxha. “Without AmeriCares and AbbVie, we would not have access to this life-saving medicine.”

The donations ensure tiny patients in need receive treatment at no cost. The drug is administered by neonatologists trained by the team from Dartmouth-Hitchcock Medical Center through the Kosovo-Dartmouth Alliance for Healthy Mothers and Babies, and the NICU is equipped with the most advanced technologies.

The most recent donation is enough to provide the hospital with a year’s supply of surfactant, Dr. Hoxha said. The reliable donations are critical in a country where nearly 30 percent of the population lives in poverty and cannot afford treatment.

“The health care system in Kosovo is getting stronger and AmeriCares is contributing to those improvements,” said AmeriCares Medical Officer Dr. Julie Varughese. “We are giving a new generation a pathway to health and opportunity.”

*child’s name has been changed

Give health. Save lives.