In 2013, the newly rebuilt Hachimaida workshop for people with disabilities in Shiroishi, Japan reopened – providing a vital service to disaster survivors in the community.  The workshop, which was destroyed by the March 2011 earthquake was rebuilt with the support of AmeriCares, our partner, The Association for Aid and Relief (AAR Japan) and the umbrella organization that runs the facility, Shiroishi Youkouen.

“Without AmeriCares help, we couldn’t take care of our members with the care and dignity that they deserve. You helped us when everyone else said ‘No,’” said Mr. Ota, Managing Director of Shiroishi Youkouen.

After the 2011 disaster destroyed two out of the three Hachimaida facilities, its 40 members had to cram into a single room or work outside in the cold. The workshop now has a small store, where the members sell organic vegetables and their famous rice. One of the local farmers expressed his sincere appreciation, explaining to the team that he could no longer look after his rice paddies himself; he needed the Hachimaida members’ help, which required the workshop for processing and storing.

Shiroishi City was hard-hit by the earthquake, but not affected by the tsunami or radiation disaster. “Although we had the support of the town, no one had the budget to rebuild Hachimaida,” said Mr. Ota. Now, Shiroishi Youkouen’s various workshops are at full capacity. “We think because of our reputation for taking care of people with disabilities with dignity and a quality life, people move to Shiroishi, so that they can have their relatives join our facilities.”

One of the group homes, where two Hachimaida members reside, is unique. “This is the first group home in Japan, where elderly patients with dementia live with people with intellectual disabilities,” said Mr. Ota. He guesses that one of the reasons people keep the groups separate is due to prejudice. “Some relatives don’t want their family members to live with people with disabilities. Our organization is working to combat that prejudice and this is one way.” 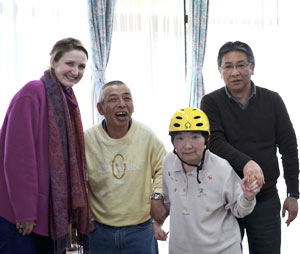 Rebuilding the Hachimaida workshop reinforced Shiroishi’s commitment to maintaining a society in which people with disabilities can live safely as well as with dignity and pride. AmeriCares is proud to partner with AAR Japan and our friends in Shiroishi to make sure that this commitment will not be dissolved by disaster.