When the Rains Come, What Happens Then?

Dr. Peterson directs the delivery of more than $500 million in medical aid and relief supplies to more than 90 countries each year. Anne oversees AmeriCares Emergency Response, U.S. Medical Assistance and Medical Outreach programs as well as all other ongoing global health programs.

An AmeriCares team arrived in Kathmandu, Nepal, just 48 hours after the April 25 earthquake. AmeriCares teams have been holding mobile health clinics for survivors and traveling to rural areas with stocks of medicine and supplies, to treat survivors and assess needs at hospitals and clinics.

What is going to happen when the monsoons hit Nepal? Once the rains come, they are really torrential. The tarp shelters will be inadequate, but we hope the tents will keep the water out – for those who have them. Currently, there are not enough tents or tarps, and, moreover, it will be impossible to reach everyone who has need for these temporary shelters in time. People will have to return to the existing buildings, hopefully the less damaged ones. So they are shoring up the broken walls or rebuilding with traditionally stacked stone. There are bulging walls and cracked buildings that won’t be repaired before the monsoons arrive.

When the rains come, they will pour into the earthquake cracks in the buildings; they will soften the already destabilized ground under buildings, and there may be more building collapses with a new round of people killed and injured. This time, those injured will be even harder to reach because of monsoons. And because these events won’t all happen at the same time, but over the course of days and weeks as the rains continue, their deaths and injuries won’t capture the attention of the world. Fresh disaster response money is unlikely to appear despite the new need. The international flash appeal has only received about 17% of the estimated needs even for the response to the initial earthquake. Regardless, I’m pleased by the level of attention and really strong response that AmeriCares has been able to mount.

As we face the fact that thousands of buildings have been damaged or destroyed including over 1,000 medical facilities, there is real urgency to do more than tents, but that poses some serious challenges. If we don’t do anything, people will rebuild with what they have and know how to do. But we already know that many of those kind of structures didn’t survive the first quake, and those that survived with damage are at greater risk with each new tremor. And to complicate matters, many of the structures needing to be rebuilt or made safe can only be reached by helicopter or donkey (even before avalanches blocked the roads), so bringing in heavy building materials isn’t feasible for so many sites. 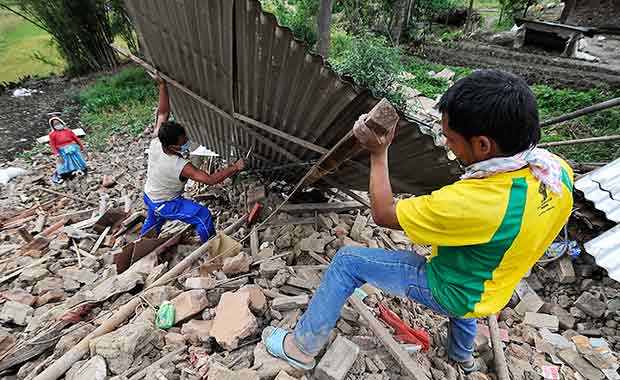 It’s also important that all we do matches both the culture and the Government of Nepal’s plans. The Government, however, hasn’t had to respond to a large number of disasters, so they have a limited variety of experiences to draw upon. The organizations in the disaster response community are the quick fix people, awesomely important, but that also means they don’t always plan as much for the long term. In this case, it may result in setting designs and approving a health clinic prefab structure that might not include local materials and might only be built to get through a single monsoon season. This is better, but the resourcefulness of the Nepali people makes me think that if they had a different building method using mainly local materials to repair or rebuild buildings and make them more earthquake resistant, they would do it. Enabling those most at risk has far greater reach than if the response community alone tries to do the job.

As we look at what structures and building methods did withstand the earthquake, some practical ideas emerge. After sharing discussions on specific solutions, we have asked some experienced engineers to weigh in on the practical potential of these ideas. We look forward to their input.

The Consequences of Survival

“Do You Have Any Questions For Me?”