A Brighter Day for a Hard-Hit Village 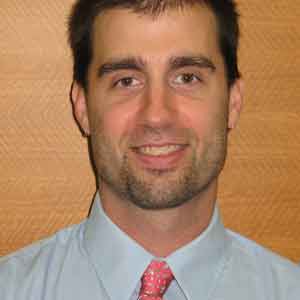 Bret coordinated the distribution of Americares medical aid for several disasters including Haiti, Japan, and India

In December, 2013, Brett McEvoy was deployed to the Philippines as part of our Typhoon Haiyan Response Team, to assist with distribution planning for medicines, medical supplies and aid. Here, he provides a first-hand glimpse into a day of fun and entertainment for the hard-hit community of Tanauan, Leyte, provided by our partner SHINE, and supported by AmeriCares.

After some time at the Mactan Air Base, we flew to Tacloban then drove about 10 miles south to Tanauan, Leyte, where we met up with the team from a local organization called SHINE.

The work here was pretty inspirational—not really a typical AmeriCares relief project, but a great project nonetheless. The SHINE team is approximately 25 individuals from Cavite (outside Manila) that hired a bus and drove the 30 hours to get to Tanauan. SHINE stands for “Share, Inspire, Empower.” They raised funds to hire the bus, and brought a whole lot of gifts for the children and families. They also contributed their respective talents—one member is a hair stylist, so they offered free haircuts all day; another is a cook, so they served hot meals for breakfast, lunch and dinner; another is a makeup artist, and she did face painting for the kids. When we arrived, there was an inflatable slide set up for those kids to play on — inflated via a generator donated by AmeriCares — and a couple of basketball hoops. Apparently basketball is a favorite sport here.

After the inflatable slide, basketball, haircuts and face painting, the whole community gathered around for some games. The SHINE team began with the children, engaging them in various races and contests, and giving out prizes to all. Then it was the adults’ turn, and the adults quickly became as excited as (if not more than) the children. Everyone was laughing, smiling and cheering their neighbors on. Whereas the children got toys, stuffed animals and notepads as prizes, the adults got cooking oil, pasta, rice and canned foods. The games were organized via microphone and accompanied by music – all powered by the AmeriCares generator. 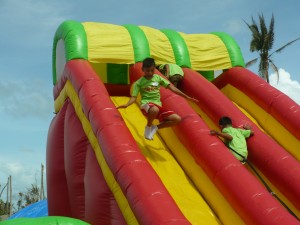 Then for the first time in almost six weeks, the onset of dusk didn’t bring total darkness. With funding from AmeriCares for lights and installation labor, 30 light fixtures were hung around the community and powered by the generator. The lights brought greater security, as well as a place to gather and a semblance of normalcy.

The response from the community was overwhelming, “Thank you for the joy and emotional relief that AmeriCares and SHINE gave to us,” said one local resident.

I wrote this blog post sitting under the lights as SHINE raffled off some additional prizes, including foldable beds, tables and a stove. A portable screen in the background would soon project an outdoor movie. Few if any people from the community left the area, the circle of light that we have created in the midst of darkness.

In the Philippines: Listening to Haiyan…