A Garden of Flowers in the Season of Ebola 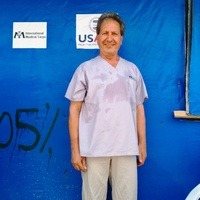 Dr. Majid Sadigh, MD, one of the medical team members recruited by Americares and fighting Ebola in Liberia in 2014, gives a deeply personal and close-up views of his work at an Ebola Treatment Unit as Americares expanded its support for health workers on the front lines during the Ebola Crisis.

A wooden tablet in an Ebola graveyard reads “E—–”. She was only 24 when Ebola claimed her life along with her husband and child. E—‘s three remaining children, all younger than 10, were forgiven by Ebola but expelled from home by their neighbors.

We had three more lives lost overnight and two more since early morning. The more stable patients or those in the recovery phase sit outside, under the shade of tents, or lie silently in their beds.

A young woman in scrubs washes a 3-year-old girl in front of the compound. Her gloved hands move assuredly, dipping the sponge first into the bucket of water and then to the girl’s bare skin. The girl has been sick for a long time and finally recovered, though she is all that remains of her family. The woman herself is a mere 18 years of age, delivered to the Ebola Treatment Unit with her mother and older sister a few weeks earlier. Somehow she has also survived while her family has not. Without a word, she has taken her place in the hot zone, tending to the weak and young. You can tell who the recent survivors are from their motionless faces, as though still in the throes of sickness. In the background, smoke rises from incinerators filled daily with material from the hot zone.

An older woman and man sit in white plastic chairs around a small white table, convalescing.

Another constant presence here is C——-, who cleans the laundry. She lives in the nearby leprosy colony with her parents, both disabled by their disease.

In the first room of the unit with confirmed cases are two beds. The first bed holds the blanketed dead body of a young woman, waiting to be carried away to the morgue. In the second bed rests a patient lying motionless except for gasping breaths, in a state of coma, completely unaware of the nearby body and the fate awaiting him.

In the next room, a young woman sits at the bedside of a child, and begins singing and swinging her arms in dance—her energy filling the small room—when she hears that her blood test for Ebola is finally negative and that she can return home. She has become one of the unit’s coveted survivors. 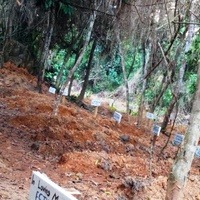 In another room, a young uninfected mother breastfeeds her infected toddler without gloves or other form of protection. Many patients in the ETU cannot abide by all the detailed infectious control protocols mandated in the hot zone—when have they ever had exposure to this language of sanitation and isolation? Liberia is a country of people who touch, speak with their hands and celebrate their relationships with others. How to banish a child from her mother, even under the threat of a touch tinged with Ebola?

The young man whom I observed briefly in the triage area the previous afternoon is tucked tidily on a floor mattress in the corner of the room, his deep, fleeting breaths pushing his nostrils wide in a drama distinct from his otherwise unresponsive countenance. 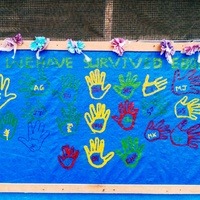 Yesterday, a 3-year-old girl was sitting outside, a faint smile turning up the corners of her mouth. Her hair braided in tiny knots spoke of care and attention. A silver heart lay at the center of her black t-shirt.

Today she was not sitting outside. Instead she lay by her mother on a mattress on the floor. Her mother was in the act of dying, folding into herself like a baby, her back turned to her child, lost to her.

The girl sits so quietly. Her face is flushed with fever, the corners of her mouth and the tip of her nose a fiery red against the backdrop of her black shirt and the small, silver solitary heart at the center.

I want to cry loudly into my full protective suit.

The mother died first, and the daughter followed that same day.

Seeing Ebola from the Epicenter of the…

Working as a Team in the Ebola Hot…