The suffering continues for countless  families in the aftermath of a massive flood disaster in Uttarakhand, India. Garrett Ingoglia, AmeriCares vice president of Emergency Response, was on the ground with our India team, mobilizing a long-term emergency response. Here, Garrett delivers a first-hand glimpse of the devastating crisis.

In June, the Indian state of Uttarakhand was hit by a “Himalayan tsunami.” High in the Himalayas, the  heaviest monsoon rains in 80 years caused catastrophic flooding. Downstream, swollen rivers overtopped bridges, destroying villages; countless victims were  buried beneath massive debris flows. The floods and landslides killed at least 5,000; some estimates are double that and the true number of dead may never be known.

“The scale of the disaster is staggering.”

What is certain is that this is the deadliest monsoon disaster in India’s history, and by most accounts, in terms of fatalities, the worst natural disaster in the world in the past two years.

How could a disaster of this magnitude receive so little international attention?  One reason may be the area’s remoteness and inaccessibility.  I didn’t realize just how difficult it would be to work in that region until I actually tried to get there. I was traveling from New York to meet a team of AmeriCares doctors and relief workers. After the 15-hour flight to Delhi, I took another plane to the state capital of Dehradun in the lower Himalayas, followed by a gut-wrenching 7-hour drive to Rudraprayag district over unpaved roads made even more treacherous by washouts, landslides and slope failures.  And that only got us so far—my colleagues and I could not reach the most heavily affected areas, including the town of Kedarnath near the source of the Ganges, accessible only by helicopter.

Even in the areas we saw, which were spared the worst of the flood’s fury,  the scale of the disaster was staggering. Homes were destroyed, gutted or covered by mud and sand. Roads were blocked by massive landslides that officials could not clear; in some cases, huge sections of road had simply fallen away. The harsh terrain and the damage to already-weak infrastructure present huge challenges to the relief effort.

“The people of Uttarakhand need both immediate and lasting support.”

Those who managed to escape the deadly waters faced a harrowing multi-day climb down the mountain to return to their families and receive assistance. One of our doctors tended to two newborn children delivered at home without attendant care because their mother was blocked from the medical center by landslide debris.

The Indian military and Indo-Tibetan Border police rescued tens of thousands of survivors – including pilgrims who had been trekking to Hindu religious sites high in the mountains.  AmeriCares provided primary care for hundreds who needed immediate attention.  Other  NGOs responded with food, resources for shelter and other assistance. As  floodwaters receded, the story all but disappeared from even the Indian media.

But for the people of Uttarakhand, the crisis is just beginning. 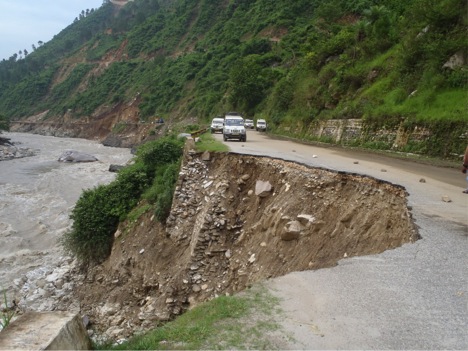 High in the Himalayas, scores of towns such as Kedarnath are completely destroyed. They will take months or years to restore. Villages throughout the region, even in areas that were less badly damaged, rely heavily on income generated by pilgrims to Hindu sites. Those villages are now completely unsuitable for tourism and it is difficult to imagine how families will replace that income. An entire economy has been plunged into poverty.

The damage to the roads and other infrastructure, combined with the injuries and illnesses caused directly or indirectly by the storm, will exacerbate a healthcare situation that was already tenuous. Add to that the incalculable emotional and psychological costs of the storms—including the loss of so many members of the community. The people of Uttarakhand need both immediate and lasting support.

Right now, there is a crucial need for health and medical care, psychosocial support and counseling, and, in some cases, food and shelter for survivors. In the longer term, the Indian government and the international community will be called upon to make a substantially greater investment in order to restore infrastructure, help people find work, address long-term mental health issues caused by unfathomable trauma and loss and make this region more resistant to future disasters.

Our response should match the scale of the disaster — not the level of attention paid by the national and international media.

On the Ground in Moore, Oklahoma

Estelita: A remarkable woman after the…