Helping Survivors Cope with Many Forms of Loss

In April, 2011 a series of deadly tornadoes struck the South, Midwest, and Eastern U.S., claiming hundreds of lives and destroying thousands of homes. To help survivors in hard-hit Birmingham and northern Alabama, AmeriCares awarded disaster recovery grants to partner organizations, including the Northwest Alabama Mental Health Center, the Birmingham Baptist Association, and the North Alabama Medical Reserve Corps. In June 2012, Garrett Ingoglia, AmeriCares Director of Emergency Response, visited the area to check the progress on the grant funded programs, and to see how these programs were helping tornado survivors recover.

“Long after the disaster faded from the news, families and individuals continued to struggle.”

More than a year later, most of the visible indicators of destruction are gone. Cleaned up, rebuilt, swept away. But there are still signs, if you know what to look for. The once-struggling commercial district of Cordova — cordoned off and deserted after the storms hit — remains vacant to this day.  Areas that were once heavily wooded are now almost completely bare. 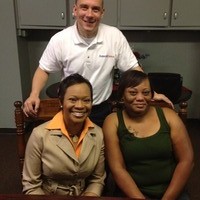 What struck me most was the fact that long after the disaster faded from the news, families and individuals continued to struggle with loss.

While some people struggle with the loss of material things—a roof, furniture, a job—others struggle emotionally and mentally with much greater loss. I spoke with Carol, a woman from rural Alabama whose grandson died and daughter was seriously injured in the storms that ripped through her town. Now a year later, she is finally getting the care she needs, thanks to a nurse and therapist from the Northwest Alabama Mental Health Center, who provided her with a diagnosis and referral to medical professionals.  Carol was thankful that both her nurse and therapist took the time to listen to her, using their professional skills to determine health issues that could be addressed.

Carol’s story was just one of many I heard about from Becky, a licensed social worker and April, a program coordinator for the Northwest Alabama Mental Health Center’s Project Renew.  They’ve seen people suffering from depression, post-traumatic stress, and panic disorders as a result of the storm.  “People here are stoic,” said April. “If they ask for help, they really need it.”

“It was gratifying to see the compassion and dedication of the professionals who are helping survivors recover.”

Losing a home or job will cause hardship for anybody.  But these losses are particularly challenging for survivors who were barely making it economically before the disaster. When the tornadoes struck, Beverly endured a double disaster – losing both her job and her home in a single day.  Afterwards, she and her daughter spent months in a hotel room provided by FEMA, until she could finally afford an apartment. Rent was barely manageable, and there was no money left for furnishings, aside from a single bed.

The day I met Beverly, she was thankful to the point of tears because her caseworker was able to secure another bed for her teenage daughter along with bedroom furniture—all donated by local community organizations. The only one who looked happier than Beverly was her caseworker, Treva, of the Birmingham Baptist Association. “I couldn’t wait to give her the good news,” Treva said.  “It felt wonderful.”  It was clear that Treva had great compassion for Beverly, a woman who had been through so much.  “In times like this, you need somebody out there who cares, “ Beverly explained. “Treva was the person out there who took the time to listen to me.”

It was gratifying to see the compassion and dedication of the professionals who are helping survivors recover.  As these communities rebuild homes, businesses and infrastructure, there are many people in Alabama and elsewhere struggling with the persistent and often hidden consequences of disaster. Even in the United States, with its well-funded and sophisticated emergency response and recovery system, people like Beverly and Carol face enormous challenges in rebuilding their lives.  Programs like Project Renew and the Birmingham Baptist Association’s case management initiative, led by people like Becky, April, and Treva, continue to help disaster survivors navigate the long road to recovery.

From my small plane window

Getting Ready for Hurricane Season Here…