Dmitriy Popov and Madeleine Rowan were part of the AmeriCares relief team working in Staten Island in the weeks after Hurricane Sandy. Below, Dmitriy and Madeleine provide a glimpse of the work being done on the ground to help Sandy victims, and the great need for continued aid.

The communities we saw during our visit to Staten Island were badly destroyed. Entire neighborhoods were empty, and many homes were marked with red or yellow stickers because they were uninhabitable.

We began our trip by delivering 150 tetanus vaccines and 150 flu vaccines to the Beacon Christian Community Health Center. These vaccines are especially important as the weather gets colder and as people begin restoring their homes and continue to clean up debris. We have supported the BCCHC since the early days of the response, helping them to see patients for the first time since the storm after the center was left without power.

We also met with the Veterans of Foreign Wars (VFW) and the Jewish Community Center in Staten Island to discuss how we could help support both organizations in the relief efforts.

VFW started out as a small local recipient of donated food and supplies and grew into a big distribution center, collecting and then distributing the supplies to people in need. After the storm, VFW started a generator-loaner program. Residents without power were able to sign out generators and return them when power was restored to their homes. The organization also acted as a local charging station for those left without homes, cars, or power. 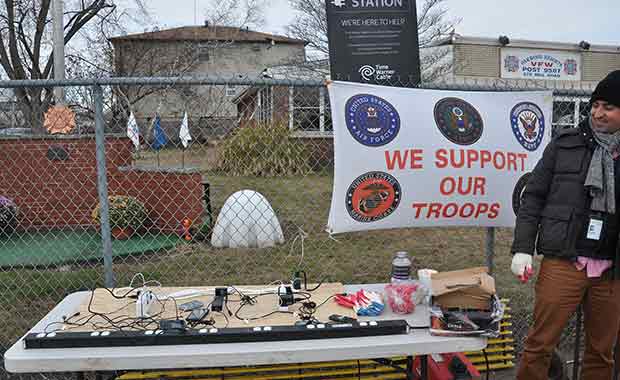 The Veterans of Foreign Wars set up a charging station for Sandy survivors.

While we were impressed with how much this particular organization was able to do with such limited resources, we learned that they have been extremely busy serving the community and could greatly benefit from additional resources. In our conversation, they expressed a great need for heaters as we enter the cold winter months, and fans to fight mold in homes with severe flood damage

It is evident that need is still so great in these communities, and that the recovery process is only just beginning.