Join Us for an Unforgettable Evening

Mark your calendar for an inspirational evening of cocktails, dinner and dancing at the 30th annual Americares Airlift Benefit.

On October 14, 2017, partners and friends will gather for the 30th Americares Airlift Benefit to support our humanitarian work in the U.S. and around the world. More than 800 guests will join us in an airplane hangar uniquely transformed for an inspirational evening of cocktails, dinner and dancing.

The evening includes our signature Airlift where midway through the evening, a group of guests and Americares staff will leave their tables, climb aboard a chartered plane and depart for a 24-hour journey to see our work firsthand. Remaining guests participate in an exciting send-off from the tarmac. This year we travel to Guatemala, one of Americares first Airlift destinations. Guatemala struggles with poverty and chronic shortages of medicine. Children are especially vulnerable. Americares supports a network of 280 health centers throughout the country, bringing improved health and hope to Guatemalans.

Brzezinski’s relationship with Americares, and our founders, Bob and Leila Macauley, goes back decades. Her father, former National Security Advisor Zbigniew Brzezinski, was the longtime honorary chairman of Americares Advisory Committee, and she has traveled with Americares on aid missions to Poland and Haiti.

Brzezinski and Scarborough have hosted fundraisers for Americares over the years and their children have traveled with our organization.

The duo has hosted MSNBC’s Morning Joe since 2007, giving viewers an in-depth analysis of the day’s biggest news stories. Brzezinski was previously a CBS News Correspondent; Scarborough served in the U.S. House of Representatives from 1994-2001.

Photo by Miller Hawkins for MSNBC

The Millennials have performed around the globe for countless Fortune 500 companies, non-profits and private clients. A unique, sophisticated ensemble, their vocalists have performed with Prince, Usher and Sting, and entertain with music from all eras including Motown, Top 40, hip-hop and some of the best authentic Latin music around. They pride themselves on exceptional vocals, horn section, a touch of swagger and unmatched edge.

Mexicali Marimba Band is led by Arthur Lipner, one of today’s leading vibes and marimba players. The Chronicle Herald (Nova Scotia) wrote, “Lipner belongs to that rare category of master player with Art Tatum and Oscar Peterson…” He’s appeared with Russian Tuvan Throat Singers, in Ghana at a small rural village, Rio de Janeiro’s Carnival, Royal Palace in Marrakesh, in the mountains of Norway on an ice xylophone, and much more. Arthur is also a prolific composer and educator. The documentary TALKING STICKS features his inner and outer journeys (talkingsticksfilm.com). Arthur has appeared on over 50 albums, including his recent best-of double cd “Two Hands, One Heart”.

The award is dedicated to Americares founders Bob and Leila Macauley, ordinary citizens who saw a profound need and risked everything to make a difference. 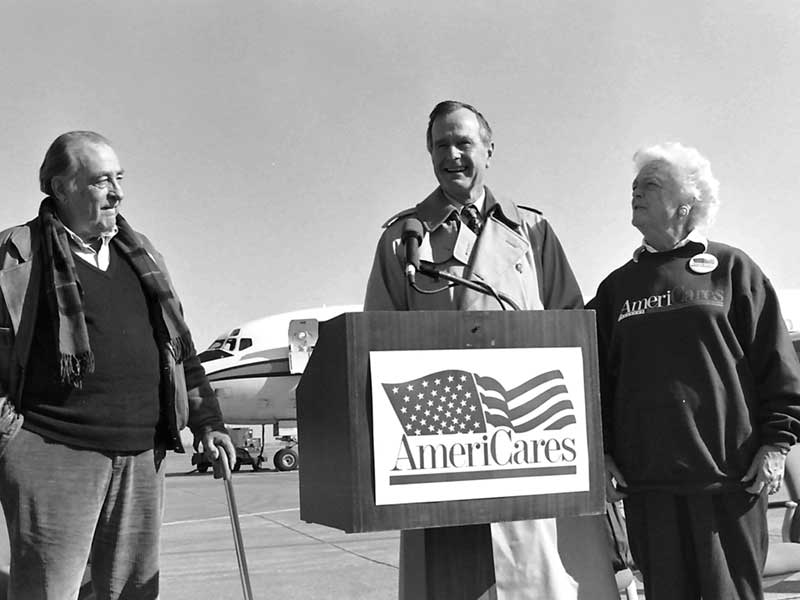 President George H.W. Bush and Mrs. Barbara Bush will be honored for their dedication to humanitarian causes at the 30th annual Americares Airlift Benefit in October. The Bushes will be the inaugural recipients of the Bob and Leila Macauley Humanitarian Spirit Award. Named for the founders of Americares, the award honors outstanding individuals who exemplify extraordinary courage and commitment to humanitarian endeavors and making a difference in the world.

“The Bushes have been champions of Americares since the very beginning, graciously supporting our health programs and participating in aid missions all over the world,” said Americares President and CEO Michael J. Nyenhuis. “We are pleased to honor them as the first recipients of the Bob and Leila Macauley Humanitarian Spirit Award. We look forward to celebrating their contributions and our history together at the upcoming benefit.”